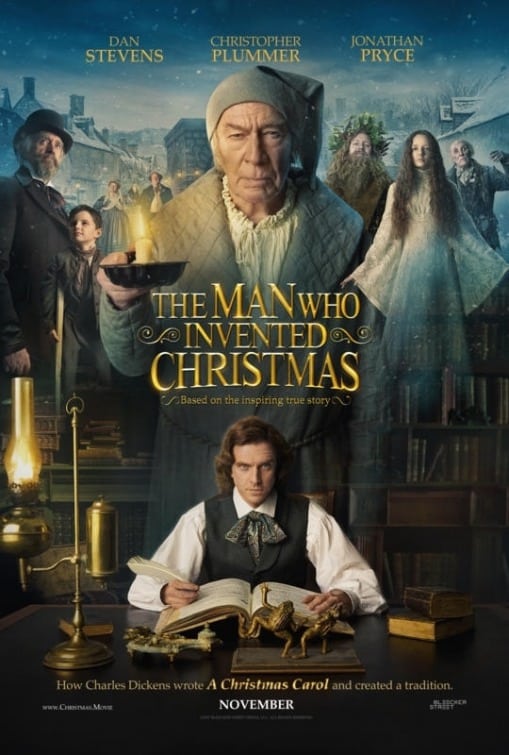 A simple yet compelling biographical drama of one of the greatest English writers, Charles Dickens, The Man Who Invented Christmas tells the journey of how Dickens wrote the all-time classic A Christmas Carol with a tinge of fantasy. In fact, the film feels less like an adaptation of Les Standiford’s biographical novel of the same title and more of a fable.

For fans of the Dickens’s novella who didn’t read Standiford’s biography, The Man Who Invented Christmas will dazzle you with the behind-the-scenes of how the literary genius builds his characters. Dickens used to say his characters would come to live and talk to him, and that’s what we literally see on screen.

The performances of every character are nailed so well by every cast member; it’s hard to pinpoint the best of the lot. Even though Dan Stevens and Christopher Plummer took up most of the screen time with their Dickens and Scrooge, the other supporting actors and actresses impressively made the most out of very little.

Of course, the highlights are the dialogue and scenes Dickens and Scrooge share, which we’ll see that Scrooge is actually the shadow of Dickens’s past and his ugly side he wishes to hide. Most of the characters in his novella are largely inspired by the people around him and the double performances some of them have to pull off, are indeed remarkable.

However, The Man Who Invented Christmas might be too bland for some despite the whimsical touch to the storytelling. There’s more if you look beyond that, though. We always see only the successes of brilliant minds like Dickens and forget they’re flawed human beings like us.

This film explores the dark periods and demons within Dickens, stemming from his tough and shameful past as a child worker at a boot-blacking warehouse. He blames his forever debt-laden father for his plight whom he eventually forgives while writing A Christmas Carol.

The journey acknowledges the wounds of children let down by their parents but alludes to forgiveness being the liberation and key to happiness, a recurring theme throughout the film. It’s fitting for The Man Who Invented Christmas, a film trying to convey the importance of giving thanks and gratitude as we approach the end of the year.

The only regrettable point of the film is the lack of portrayals of Christmas before Dickens published his novella. After all, the premise of the film is that Dickens changed how we celebrate Christmas with his A Christmas Carol, something hardly addressed in the film. What we get is only the journey, which is satisfying and relatable, but falls short of what audiences might expect of The Man Who Invented Christmas.

Summary: Intriguing, whimsical, and even heartwarming, but slightly misses the mark because we see more of the genius and less of his impact on the most magical time of the year – Christmas.