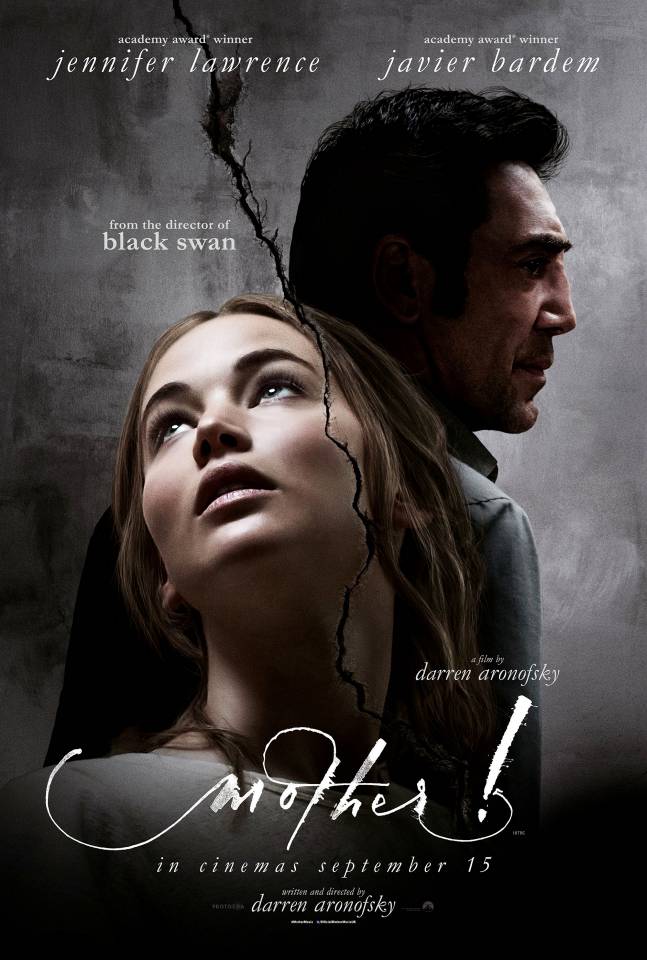 Mother! is a psychological horror-thriller that can be interpreted in so many ways moviegoers would spend the next month or so debating what it means. Mother! stars Jennifer Lawrence, Javier Bardem, Michelle Pfeiffer and Ed Harris but they all play unnamed characters. The film is set at a house located literally in the middle of nowhere, surrounded by a breathtaking view.

Director and writer Darren Aronofsky explained in interviews that the film is a biblical allegory. It seems to allude to the grotesque yet painfully true relationship between Mother Nature, God and mankind. However, most would question Aronofsky’s choice of jarring visuals to make his point. As a wise man once said, reality is harsh, but Mother! touches on several dark themes and is certainly not for the weak-hearted. It is an incredibly divisive film – you will either love or hate it, with a lot of emotions to back your taste.

A good nine out of ten shots are close-ups of characters, particularly Lawrence and her expressions. When we’re not looking at Lawrence’s pretty mien, we’ll be looking at the film’s world in her perspective. Throughout the film, we are left as confused and paranoid as our female lead. By Hollywood standards, Lawrence might not have delivered a convincing performance, but that’s only because of how difficult her role is. Some might not have bought her performance, but most would give her a standing ovation.

Bardem nailed his performance as a supposedly famous writer who is at war with his creative block for a while. His character tries to be loving to his wife (Lawrence) but almost immediately, uses his work as an excuse from marital intimacy. Bardem skilfully transitions from passionate lover to cold and egoistic artist, and back again. The unpredictability of his emotions make him a bizarre character one will find hard to fully comprehend.

The only two other characters that struck a deep impression were played by Harris and Pfeiffer, an uninvited elderly couple who suddenly crashes at Lawrence and Bardem’s house. Pfeiffer’s performance as a sixty, sexy and sassy lady was remarkable, owning every moment of the film she appeared in. Aronofsky gets the props for writing Pfeiffer’s character to be strong but not excessive, enough to prime the audience for what awaits in the next hour of the film.

The plot thickens in the film’s latter half into an incomprehensible series of bizarre happenings that frightens and baffles Lawrence as much as we are. It is at this point that many would start feeling extremely uncomfortable as Lawrence slips in and out of insanity and delirium. Much of the imagery leading up to the end is achieved with a combination of practical and visual effects, nothing short of brilliance albeit brimming with repulsiveness.

Some might say Lawrence plays Mother Nature; Bardem plays God; their child plays Jesus; Harris and Pfeiffer play Adam and Eve; and their children, Cain and Abel. While Aronofsky did reveal his intents of Mother! being a biblical allegory and about climate change, the film can have numerous possibilities for interpretations. It could be a story about how our unending pursuit for more can hurt our loved ones psychologically, or even how mothers give unconditional love to the point where they have nothing left.

Speaking of which, Mother! has shocking similarities with *The Giving Tree*, a children’s picture book by Shel Silverstein, which sparked controversy because of the story’s dark undertones. The film’s concluding scenes would leave you in awe up to the credits, making you question everything you thought you knew about the narrative. Unmistakably and inevitably, Mother! will be one of the most debated films this year, and maybe, for years to come among psychological movie fans.

Summary: Mother! touches on dark themes, makes some blatant biblical references and is a creative and grotesque masterpiece that will leave you either in awe or disgust.