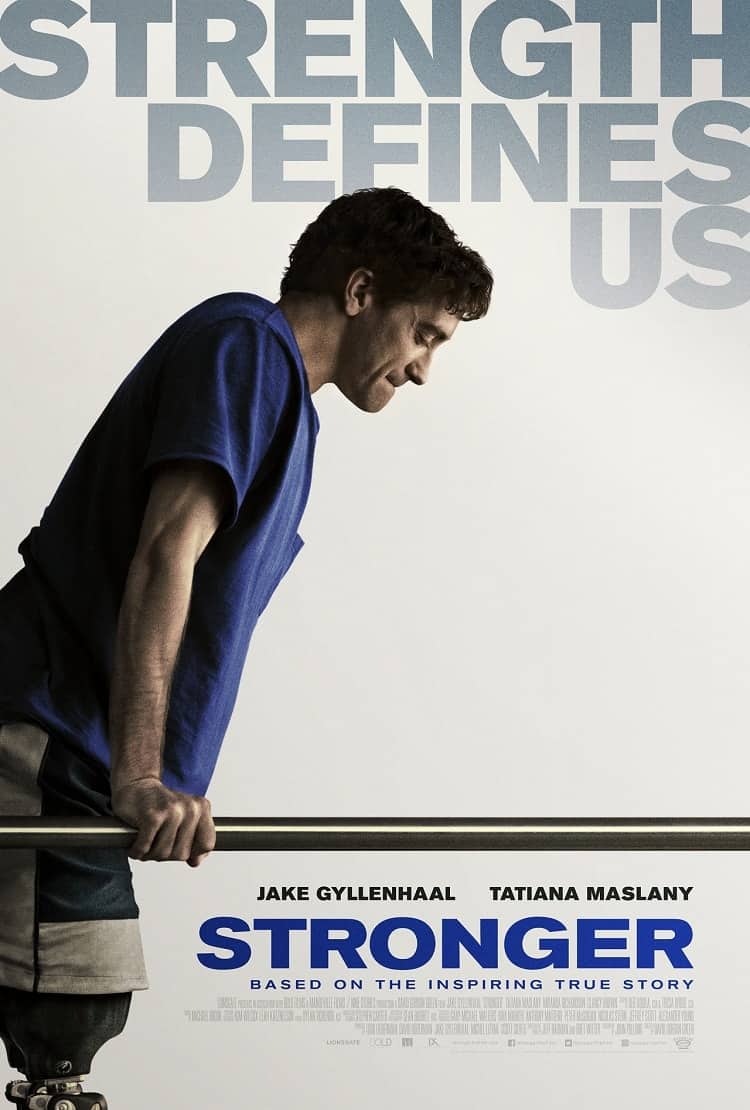 Stronger tells the story of the depressing and insurmountable periods of a traumatized Boston Marathon Bombings victim, Jeffrey Bauman. Moviegoers should walk in the theatre without a tinge of scepticism that the film is just out to stir your emotions. It’s more than that. Stronger tugs at your heartstrings not to squeeze a tear or two.

While most would consider Bauman’s struggles to be the bloodline of the film, director David Gordon Green understands that a biopic has to go beyond tragedies for the film to resonate with the audience and make the characters worth caring for. Instead of telling the entire story in the victim’s perspective, John Pallano (screenwriter) and Dylan Tichenor (editor) immerses us deeper into the changed lives Bauman and his loved ones had to lead.

The film crew knows what makes a brilliant drama film that doesn’t just satisfy our insatiable desire for happy endings. They demonstrate and prove there’s still space for films with a small budget and good storytelling, something fresh amidst the highly-budgeted franchises and sequel/prequel craze. Undoubtedly, the cast is key to giving the narrative life.

For an actor like Jake Gyllenhaal (who doubles up as co-producer in this film), the quality of his performance is seldom at question but rather, whether he’s suitable for the role. Gyllenhaal proves that his controversial role in Netflix Original Okja 2017 was merely an experimentation and that he’s still the malleable actor we know and love. Although Gyllenhaal is mostly seated or laid down in the film, his interpretation and expression of what Bauman felt during those hard times are convincing. From the early stages of recovering and allowing the loss of his legs to slowly sink in, to the heart-wrenching scenes of him breaking down from the overwhelming stress and impossible challenges, Gyllenhaal delivers.

Gaining fame and recognition for acting multiple roles in TV series Orphan Black, Tatiana Maslany stars as Erin Hurley alongside Gyllenhaal as his girlfriend whom he broke up and got back together with for three times. Gyllenhaal is supposed to be the star of Stronger but Maslany takes over the spotlight at times because of her superb performance as a self-sacrificing lover and 24-7 nanny to Bauman. While their on-screen chemistry is not unparalleled, it’s hard to find many other lead couples who could have performed better together.

Above all, Stronger only works if you’re in for a slow but rewarding experience as it brings you through the battles and turning points of a bombing survivor and his family. There are some valuable lessons and messages behind the film, which is worth the time if good storytelling is down your alley.

Summary: Not your typical based-on-a-true-story inspirational biography film, Stronger sheds light on the dark sides of coping with tragedy, expectations, and life in general after surviving a bomb attack.