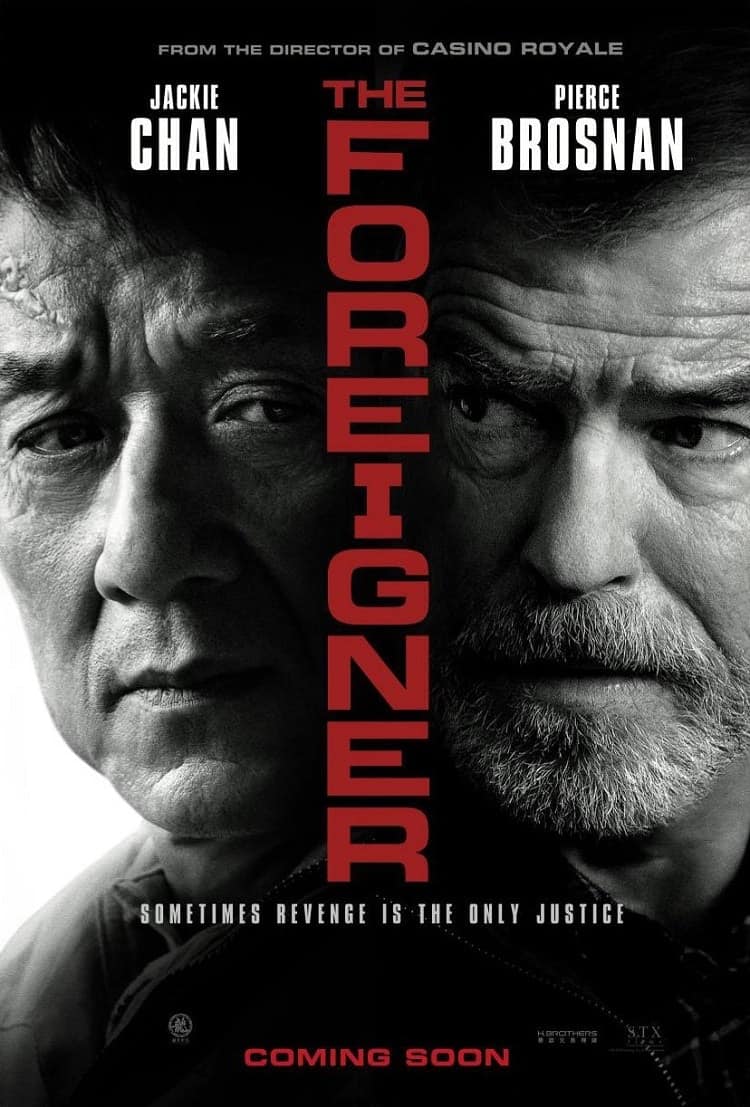 Jackie Chan stars as a Chinese immigrant who relocates several times around Asia before settling down in South London with his teenage daughter. When his daughter is killed in an IRA-instigated bomb blast, he hunts down the people responsible in classic Bryan Mills fashion. At first glance The Foreigner looks a lot like a rip-off of Taken, another resemblance is the seeming lack of story other than the clichéd “father’s love”.

Nevertheless, no James Bond fan would want to miss director Martin Campbell (Goldeneye, Casino Royale) reuniting with his Goldeneye star Pierce Brosnan, alongside Chan (who’s doubling up as co-producer), right? The only disappointing fact is Brosnan not participating in any physical fights. It would be an eye-opener to see the two legends face off, but age can be a challenge.

While The Foreigner is narratively thin, it is fun and exciting to see how Chan skilfully eludes countless henchmen despite being twice their age. At age 63, Chan is less agile and is clearly using more stunt doubles, especially for the physically demanding action sequences. The action sequences are commendable but not fantastic, though he is still swift and packs quite a punch.

A huge change from his usual all-smiles roles where he taunts his adversaries, The Foreigner casts Chan in a role where he’s either pulling a long face or tearing. While it’s interesting to see Chan in a fresh light, this role might not work for fans who are used to seeing Chan’s humorous side. Chan doesn’t have much dialogue in the film, and much of his character development largely depends on Campbell and screenwriter David Marconi.

Brosnan, on the other hand, deserves credit for his performance as an ex-IRA-turned-politician. At some points of the movie, viewers can get confused whether the movie centres on Chan’s foreigner or Brosnan’s politician. The motivations for Brosnan were a lot clearer and believable than Chan, partly because the film was seldom told in Chan’s perspective. It might be an intentional move as it’s probably more intriguing for the film to delve into some political terrorism conspiracies.

Perhaps, the best part of The Foreigner is having highly acclaimed actors and a director whose names alone could generate some box office numbers. It’s a film that immerses you in the present, captivating you with some decent action sequences and mystery behind the characters. The moment you leave the theatre is when you’ll forget about the movie.

Summary: The Foreigner doesn’t say much other than the extent to which a father would go to avenge his daughter’s murder, but worthwhile if you’re into cat-and-mouse hunts and decent action sequences.