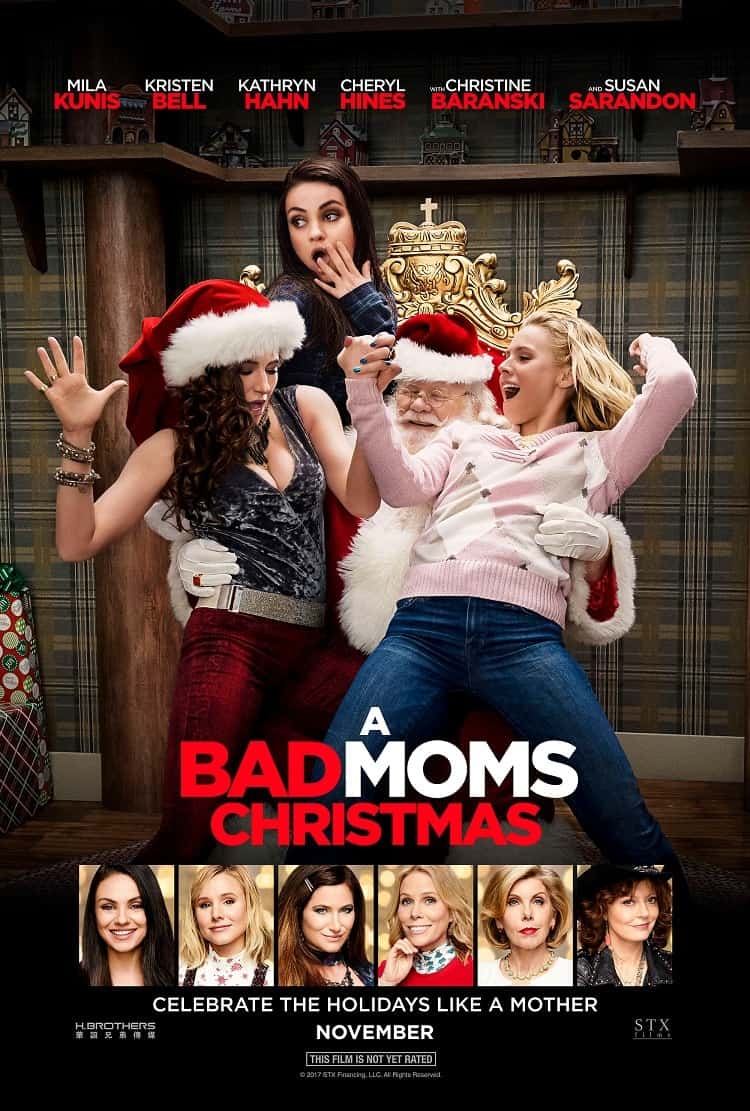 A Bad Moms Christmas is an adult comedy sequel to Bad Moms (2016) and focuses on Amy (Mila Kunis), Kiki (Kristen Bell), and Carla (Kathryn Hahn). The film is indeed as its title suggests – a bunch of naughty and hysterical mothers struggling to make Christmas special for their children. But it’s so much more than just another mature gag show.

Having the bad moms’ bad moms come on board is probably the most entertaining part of it all – Ruth as Amy’s mother (Christine Baranski), Sanda as Kiki’s mother (Cheryl Hines), and Isis as Carla’s mother (Susan Sarandon). Each older mom has a unique personality, strong but not over the top and well-fleshed out in the opening scenes.

All six moms’ tip-top performances prove the capabilities of an all-female lead cast, something not commonplace until recently as we see increasingly more female-led films. The male characters in A Bad Moms Christmas act mostly as plot devices to push the story forward, a bold decision by the film runners but it works out infinitely well.

The dialogues between the lead and supporting characters are another reason why A Bad Moms Christmas is so good. Every dialogue the characters share with one another is yet another extension of their motivations and desires. Almost every interaction will send the audience into roars of laughter. The best part? Little to no dry and cheap humour.

Although the film is clearly biased towards Kunis, Amy’s character arc justifies that direction. It is through Amy’s lens that we see the love and concern underneath the craziness most of us see in our mothers. Moms have their special ways of loving us and are often unreasonable and unacceptable to us. But they want nothing more than the best for us (quite literally in Ruth’s case).

Even then, Bell and Hines capture the dynamics between an overprotective mother and a Mama’s girl so well; it’s hard to imagine a different pairing. Hahn and Sarandon also don’t hold back when portraying older women with a soft spot for exotic dancers and go all out.

A Bad Moms Christmas does an amazing job at highlighting the flaws of the bad moms from two different generations but at the same time, illuminating the beauty and charisma of their characters. Arguably, much of the humour is rooted in eroticism, though, and might come off as distasteful to those who can’t appreciate adult comedy. However, beyond titillations, there are still merits to the other jokes and most of all, the brilliantly-written characters that are worth caring for.