Adapted from the immensely popular video game franchise, Tomb Raider is probably every Lara Croft fan’s dream movie. For the benefit of non-fans, Lara Croft as a character doesn’t have a definitive backstory, but it always involves her poking around ancient tombs in search of treasure and perilous adventures.

While the previous film adaptations featured full-on tomb raiding, the reboot attempts to tell its version of Croft family’s origin story and seeks to build a world slightly different from the 2001 and 2003 versions with Angelina Jolie as Lara.

Starring Alicia Vikander (Oscar award winner for Best Supporting Actress in Danish Girl) as Lara Croft, the daughter of a fictional English archaeologist, Lord Richard Croft (Dominic West), Tomb Raider starts off with some simple but exciting action sequences – a dizzying boxing fight, a bicycle race, and a chase with teenage thieves – to set the tone.

However, the first 30 minutes does nothing other than to tell us how resourceful, strong-willed, and adept in combat Lara is, which can be boring for viewers already familiar with her. Amid the mess of a story, though, are amazing performances by Vikander and West, and some decent father and daughter dynamics. 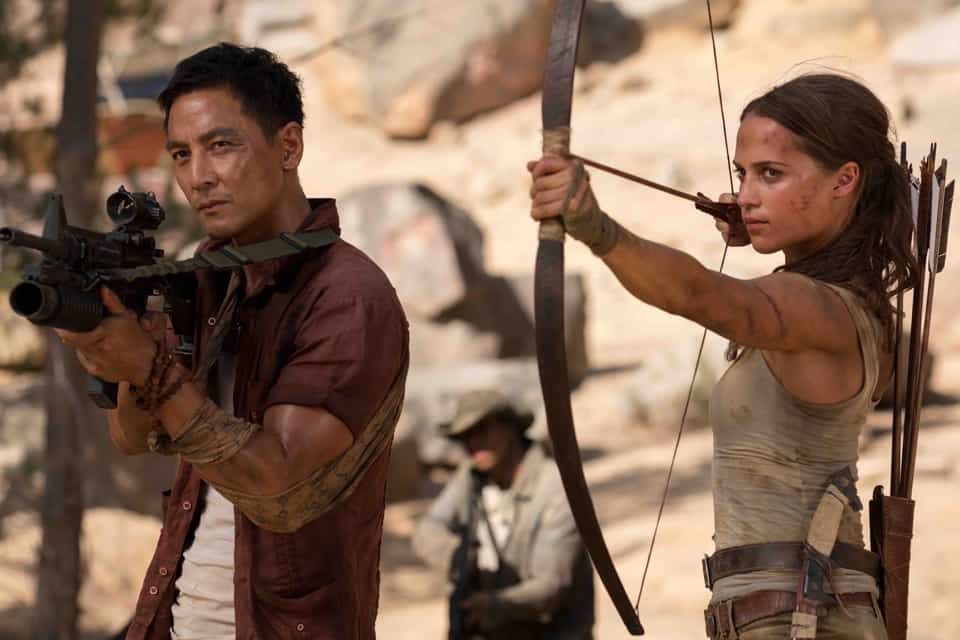 The storytelling doesn’t get much better even after Lara meets Lu Ren (Daniel Wu), the son of a captain who ferried Richard to the ancient Japanese island of Yamatai seven years ago in the film’s timeline, as they sail to look for their missing fathers. Nevertheless, it makes up with an exhilarating sequence when their ship is caught in a storm before crashing into the island.

That’s where they get held captive by villainous Mathias Vogel (Walton Goggins), a lieutenant of a secret organisation, Trinity. Vikander shines from here on – stealth killing with Lara’s signature bow and arrow, clambering crumbling structures with the climbing axe, and dodging falling rocks and ceilings while escaping a collapsing tomb among many more.

Tomb Raider really awes with stunning visual effects and flawless fighting choreography, which compensates for the flimsy storyline, despite commendable character development efforts for the film’s first-half. Even then, Tomb Raider – as a video game franchise or film adaptations – is most satisfying when you focus on everything but the coherence of the narrative, as fans would attest to.

Above all, the reboot sets a perfect foundation for at least two more sequels. Looking at Vikander’s performance in Tomb Raider, she fills Jolie’s very big shoes convincingly, but not without adding her own flavour and setting herself up for sequel comebacks. Tomb Raider is a movie worth watching, even if just for all the action and special effects.

Summary: Stunning visual effects, flawless action choreography, and a convincing performance by Oscar winner Alicia Vikander as Lara Croft are everything Tomb Raider fans will love in a film adaptation and reboot.